The company’s Vertical Layer Printing (VLP) technology, as described by the name, involves extruding thermoplastics in vertical layers as opposed to horizontal layers. This allows for the production of parts much taller than other large-format systems, with the potential to go up to dozens of feet.

VLP technology has previously been used in some of the company’s larger LSAM systems, with parts sometimes exceeding 20 feet in length. The process has now been adapted for use on Thermwood’s lowest cost 3D printer, dubbed the LSAM MT. The MT, unlike the rest of the company’s portfolio, features a fixed gantry and a moving print bed. As a result, the process required a “fundamentally different approach”.

The Thermwood engineers, rather than printing directly on the main bed, fixed an additional 5 foot x 10 foot vertical bed to the back of the original one. As the part is printed, the additional bed pulls the print along the main bed, where it can grow laterally along the length of the printer. With this new approach, the team claims the MT can print parts up to 5 x 10 x 10 feet, which was previously impossible on the system.

The printer itself uses a patented bead compression wheel – together with an FDM nozzle – to fuse layers of thermoplastic together, creating void-free surfaces. 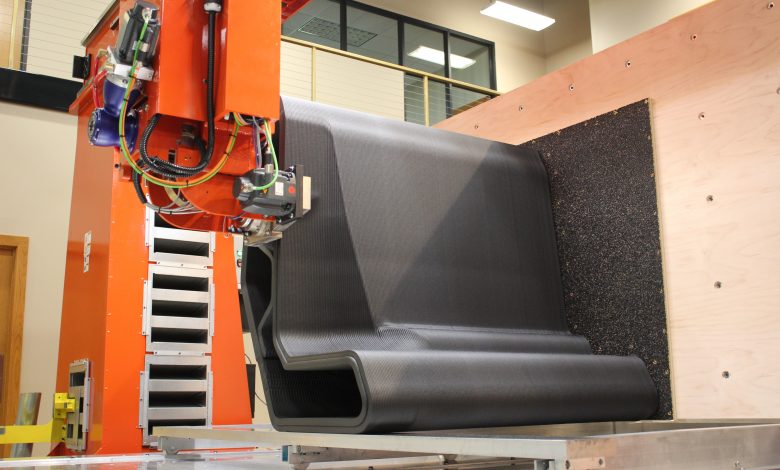 A composite part being vertically printed. Photo via Thermwood.

The second part was produced using Techmer blended 25% carbon fiber-reinforced PSU/PESU, a higher temperature composite designed for demanding molding and tooling applications. This part, in particular, demonstrated the upper limits of the MT system, as it weighed an impressive 1190 pounds and was completed after almost 17 hours. The company has also added that the machine is able to print vacuum sustaining parts that meet aerospace standards, all without the need for a secondary coating. 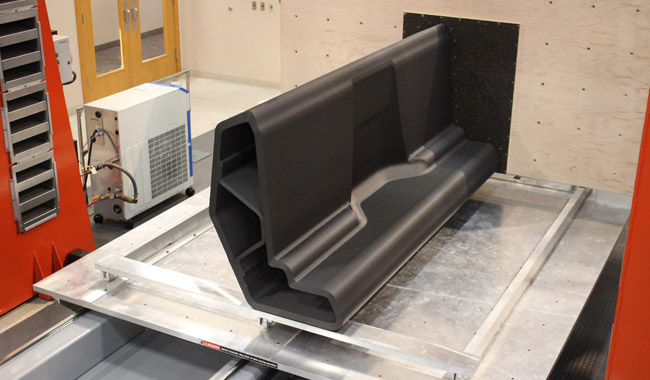 Many of Thermwood’s LSAM systems also feature a subtractive toolhead, giving them hybrid functionality. Earlier this year, the company collaborated with CNC machine software developer CGTech to simulate both the additive and subtractive machining capabilities of its systems. The project aims to use CGTech’s VERICUT simulation package to verify and optimize tool paths, eliminating the possibility of any expensive collisions and failures.

Thermwood also has a history of high-profile aerospace collaborations. Last year, the company initiated a joint project with the Air Force and Boeing to produce low-cost responsive tooling using additive manufacturing. The LSAM machines have since been used to 3D print autoclave tools for aerospace components.

Elsewhere, a collaboration with aerospace manufacturer Bell Helicopter Textron saw the 3D printing of, reportedly, the largest autoclave-capable tool ever made. Since production, Bell has been using the tool to mold and develop blades for its helicopters.

The 4th annual 3D Printing Industry Awards are coming up in November 2020 and we need a trophy. To be in with a chance of winning a brand new Craftbot Flow IDEX XL 3D printer, enter the MyMiniFactory trophy design competition here. We’re happy to accept submissions until the 30th of September 2020.

Subscribe to the 3D Printing Industry newsletter for the latest news in additive manufacturing. You can also stay connected by following us on Twitter and liking us on Facebook.

Looking for a career in additive manufacturing? Visit 3D Printing Jobs for a selection of roles in the industry.

Decide which cookies you wish to allow. You can change these settings at any time. However, this may cause some functions to no longer be available. For information on deleting cookies, please visit the help section of your browser.

With the slider, you can enable or disable the different types of cookies: